Will it Blend? A Viral Marketing Case Study

Everybody knows that the iPhone can make phone calls, play movies & music, surf the web, and a lot more. But, Will It Blend? That is the question. 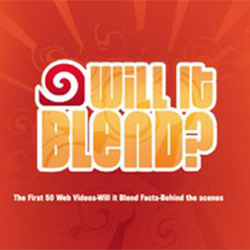 Will It Blend? is a viral marketing campaign consisting of a series of infomercials demonstrating the Blendtec line of blenders, especially the Total Blender. In the show, Tom Dickson, the Blendtec founder, attempts to blend various items in order to show off the power of his blender. Dickson started this marketing campaign after doing a blending attempt with a box of matches.

Impact of the Campaign

The phrase Will it blend? has become an internet meme on sites such as Digg. Blendtec has said the campaign has been a great success, saying that the campaign took off instantly and the company has increased sales. “Will it Blend has had an amazing impact to our commercial and our retail products.”

Blendtec now sells Will It Blend? merchandise, including a spoof shirt with the slogan “Tom Dickson is my Homeboy”.

Dickson has made many national television appearances, including NBC’s The Tonight Show with Jay Leno, where in a few quick seconds he blended a rake handle. Dickson also made an appearance on the History Channel’s Modern Marvels series. In the episode “World’s Strongest III” the show ends with a “Will it Blend” special to prove if he can blend the channel’s longest running series (in the form of a portable MP3 player.

In April 2007, radio station KDRF (eD-FM) in Albuquerque, New Mexico enlisted Tom Dickson to do a Will It Blend? version to promote the radio station. The three 30-second commercials show different styles of music CDs being blended, showcasing the station’s variety format.

In September 2007, the videos earned the second highest annual payout of about US$15000 from the video hosting service Revver.

In 2008, Will It Blend? was featured on a Dreyer’s Dibs commercial. In the commercial, a girl holding a large lollipop tries some Dibs and wonders what will happen to lollipops when kids stop buying them in favor of the bite-sized ice cream treats. The next scene shows giant lollipops being used as an alternative to waxing a man’s hairy back before Dickson blends them. A second version of the commercial has Dickson himself being waxed.

As far as awards, Will it Blend? has been nominated for the 2007 YouTube award for Best Series, winner of .Net Magazine’s 2007 Viral Video campaign of the year and winner of the Bronze level Clio Award for Viral Video in 2008.